This is what I’ve been working on for some time now. What I have here is a AW11 rear knuckle (hope I have the terms right) – the part that sits between strut and lower ball joint with Toyota RAV4 five lug spindle and Mazda rear brake rotor. 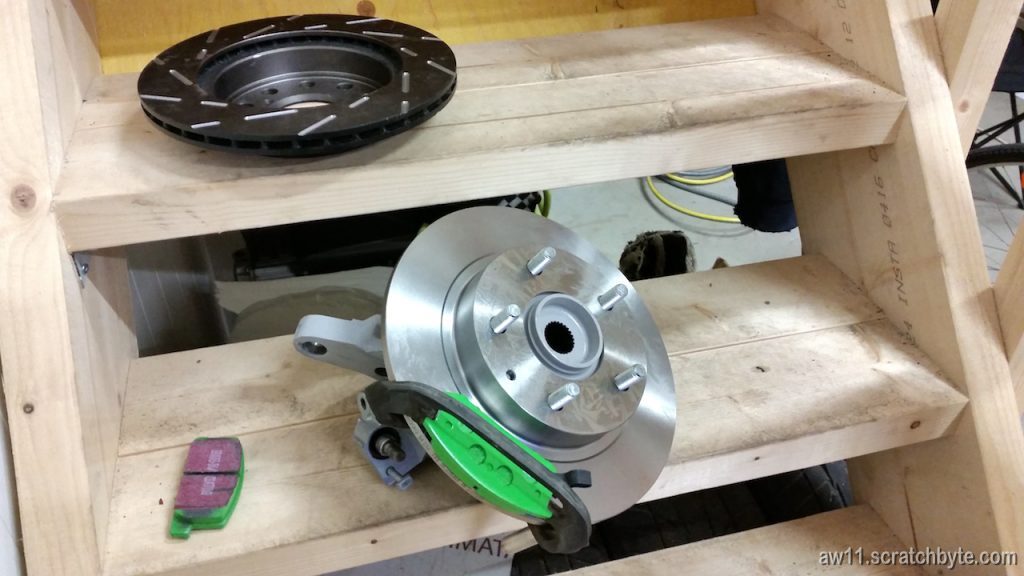 When I got the SW20 coilovers fitted into my AW11, I noticed that it would be somewhat easy to swap SW20 front hubs with brakes and everything into AW11. SW20 and AW11 share the same balljoint and I already had correct coilovers.

I decided to keep things simple and settled for early SW20 brakes, the ones with the same diameter brake rotors as late AW11. Brake rotor thickness goes up from 22mm to 26mm which adds little bit more weight, as do the slightly bigger brake calipers.

Rears were bit more complicated, but in a funny way. Found a mention from the net that a certain Toyota RAV4 front hub shares the same bearing as AW11 rear, which meant that I could replace the AW11 spindle with RAV4 spindle and get the 5×114.3 pcd.

I got the SW20 rear rotors for this setup, but found out that the total height of the brake rotor was too much and the brake caliper bracket didnt line up. Also, I made a slight mistake. The 16mm brake system (which has the 16V-casting mark) has shorter brackets and theyre only possible to fit into AW11 knuckles either by having a really small diameter rotor or building a adapter that moves the whole caliper setup outwards.

Both of the methods were unsatisfactory. I was pretty sure that there would be a brake rotor with same measures as AW11 rear rotor, except the bolt pattern, so I could use the stock AW11 rear brakes.

Thanks for the reply on the injectors! Was able to find the tophats to make them fit. New question now, I have the RAV4 hubs for the rears, and I was trying to find the rotors you mentioned, however, the 260mm diameter ones show up as the front but you listed REAR, happen to have the part number? Thanks in advance!!