I did get back from Malta already, but I still wanted to upload some pictures

I was walking on Triq Il-Kbira and at the corner of Amery street I saw a truck pulling a small car from the parking square. I thought that this must be the first time when something is done to the illegal parking, but I was wrong.

There had been a small accident and the second car involved was just taken away from the scene, but I found the markings the police had left. Slight improvement to the old, measuring the positions with tape 😀 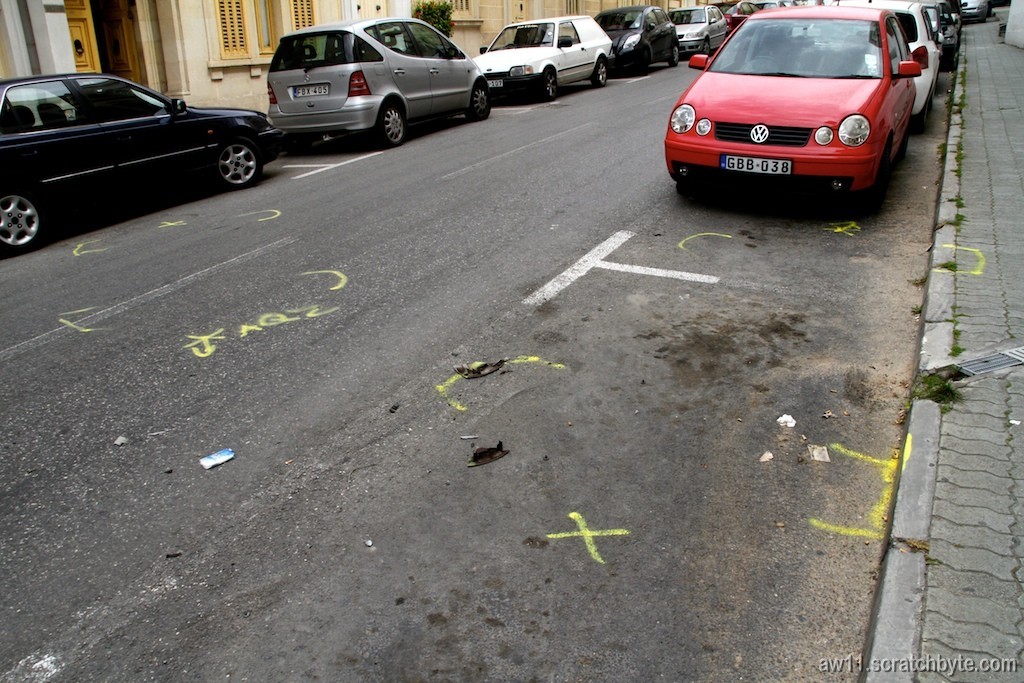 No idea what had happened. Hope everyone was ok 😐

Then I found this Toyota with Hello Kitty TRD logo. 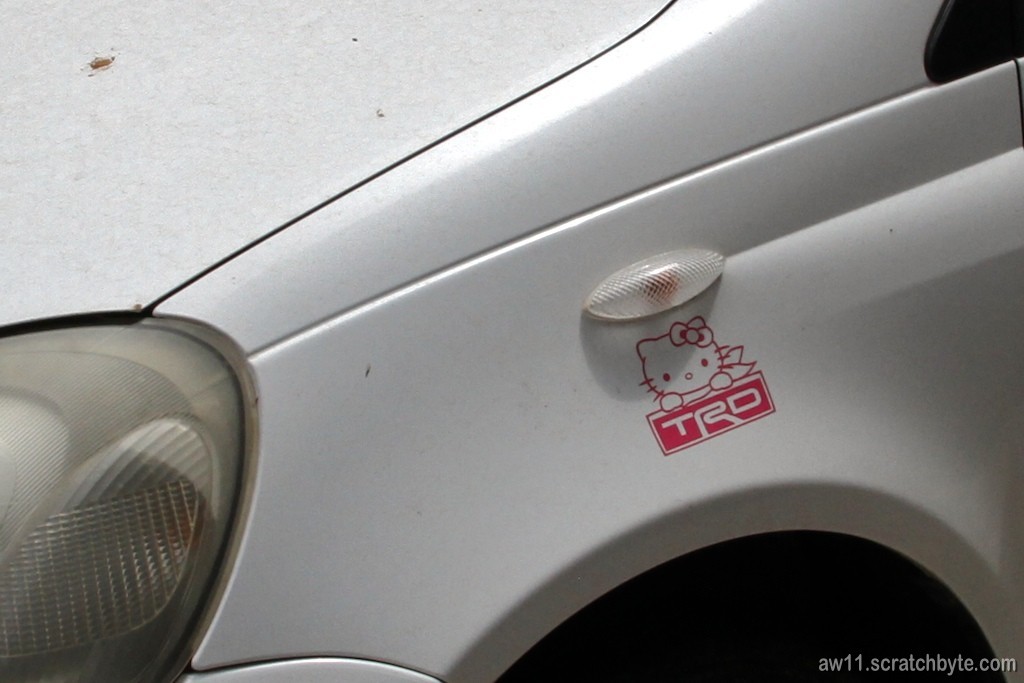 Someone parked his ITR next to a construction area. Was he trying to get some insurance money? 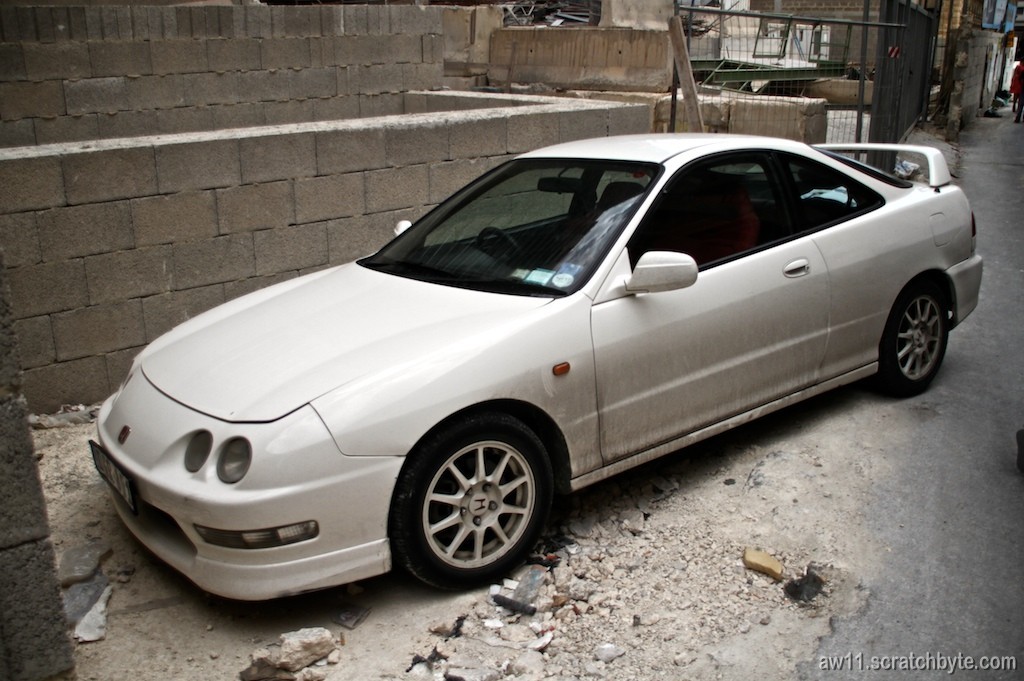 …and this looks completely safe. 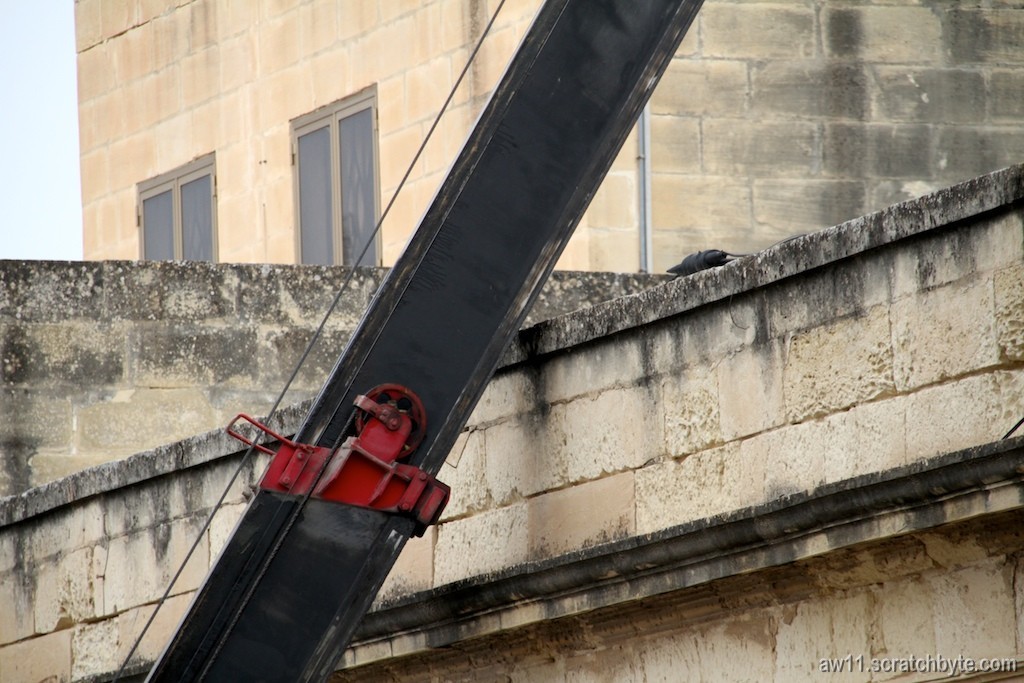 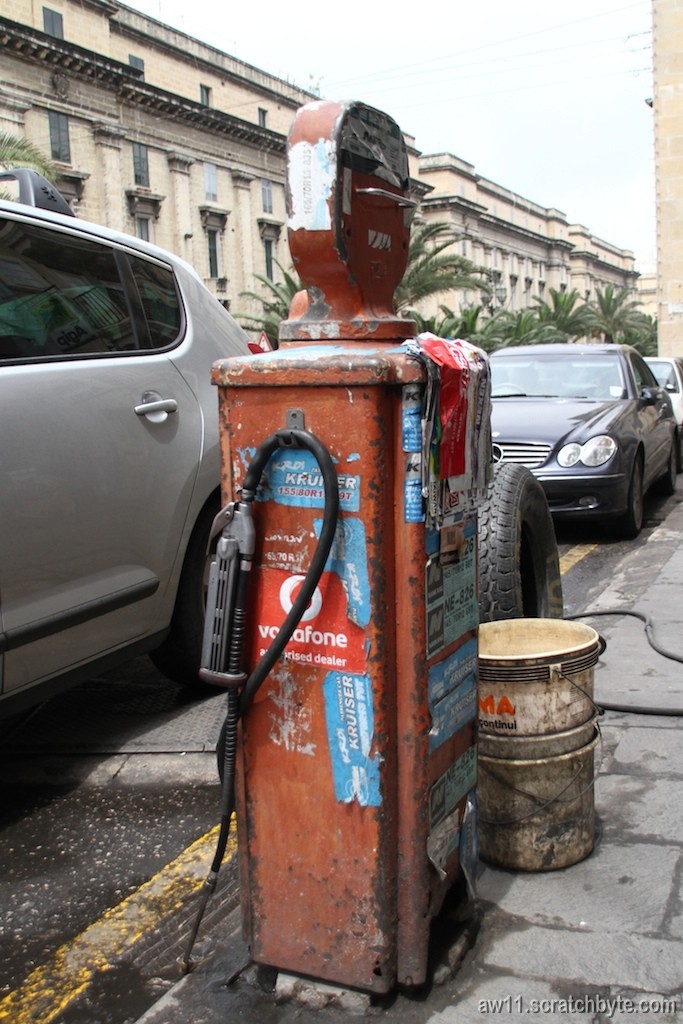 Just prior leaving, I wanted to try if I could build some kind of camera mount using a tripod and a bunch of zip ties. I was speaking with Widric on the phone, when he said that the mount for his AIM SmartyCam does have the bit needed for regular cameras.

I went through Widric’s shelves and found the parts. I attached the whole system to the rear window: 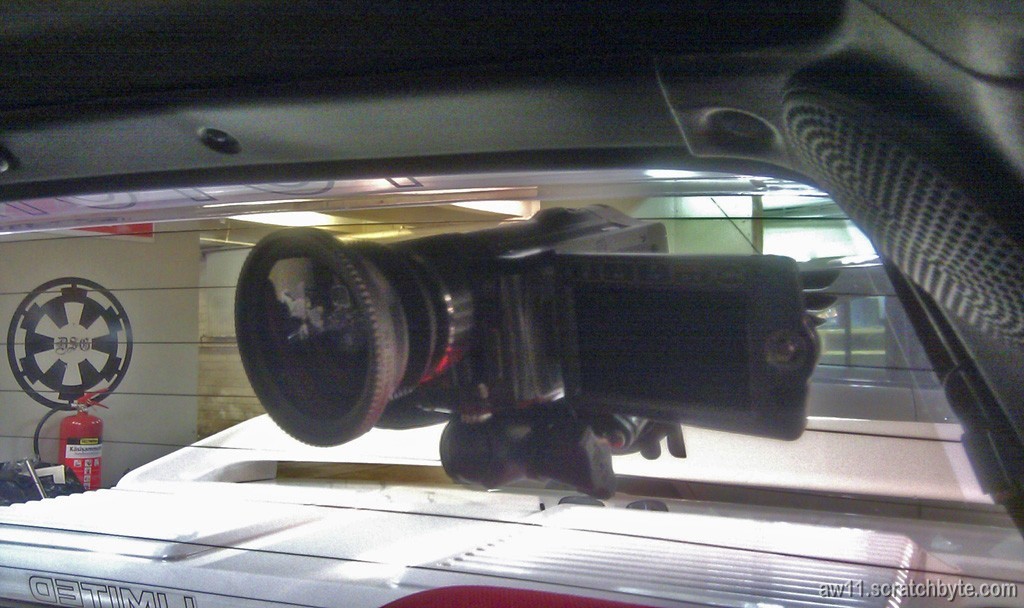 I didn’t have time to actually get out, so I just drove around our garage 😀 The box on the passenger seat is my subwoofer as Mr. Sensei is busy with other projects.

The camera vibrates slightly but it seems to be stable enough to get some kind of picture. Hope the whole rear window won’t break away when I eventually drive over a bump. 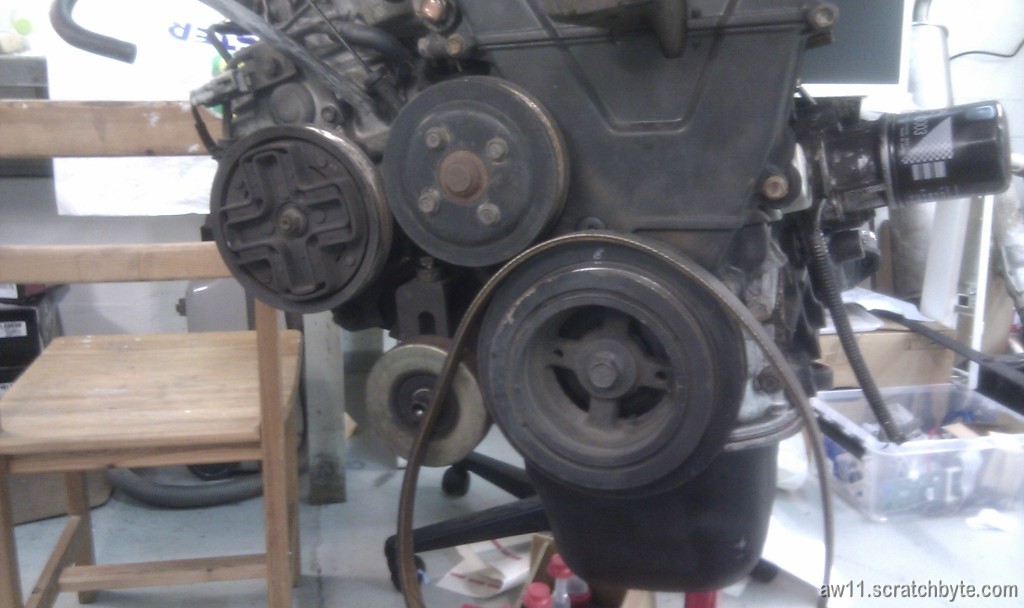 I forgot to post this picture. I undid the bit different pulley next to the crank and took the belt off. The timing mark on top of the crank pulley is really near and so is the idler pulley. I haven’t found any markings about manufacturer, but I’d say it is either HKS, Cusco or Blitz.

Diameter of the crank pulley is somewhere between 160 to 165mm. I believe this is the largest pulley which can be installed without moving the timing mark. (Well, it is sawed off in the picture…) 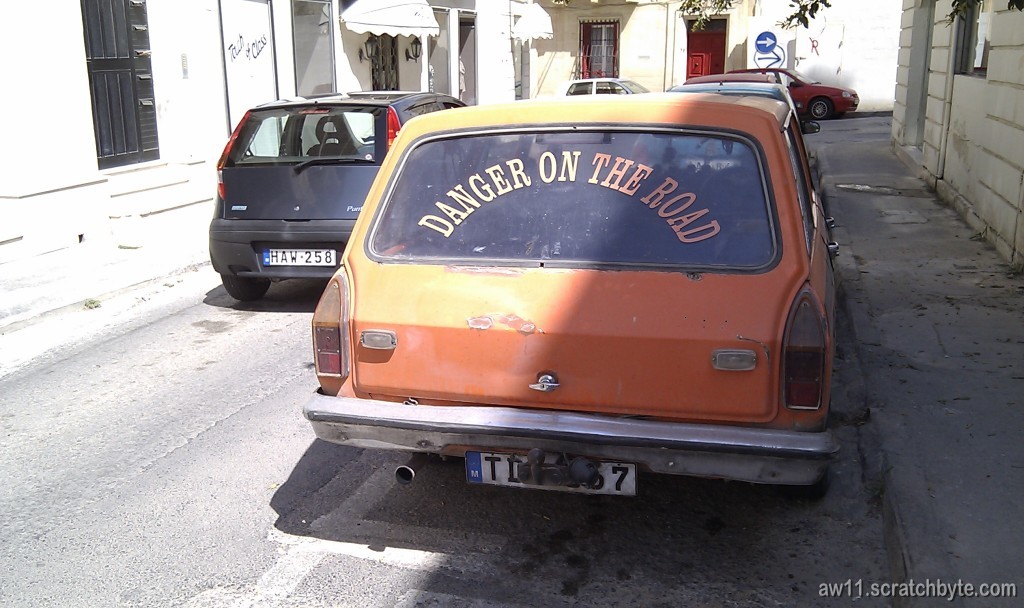 This wasn’t the only danger I saw. Once again had the privilege to participate maltese WRC tarmac special stage (bump, bump, bumpity bump then jump!) from Malta International Airport to St. Julians.

I have to admit, ppl here know how to drive in small spaces and tight corners.

En route from airport I saw a truck carrying two containers which weren’t fastened to the trailer. I thought “what the hell, do I even need this safety belt” and bit later “does this safety belt even work??”

I spoke with Maladar about the heavy, bigger car feeling on my AW11 and his laconic answer was “drive faster”.

I just realized that the Toda has 12 position adjustable dampening setting, which I can tinker with (More variables to test, argh) 😀

I cleaned my area a bit and then opened the tensioner pulley nut on the spare engine to check the part number on the supercharger belt. I noticed how the tensioner was at the other end of the rail (with absolutely minimum amount of adjustment space) and when I got the belt off the engine, I found out why. The belt said 5PK950, so the previous owned had used the original belt with the larger crank pulley!

Some googling and I found a article fromtwincam.org about the belt lengths. It seems that a little bit longer belt would do nicely with my oversized (165mm) pulley. Maybe a 5PK960? 🙂

I’ve been wondering why my AW11 feels so heavy. I don’t mean that the clutch is heavier/lighter or the steering needs some muscle when standing still. The car just doesn’t feel agile.

I’ve driven Maladar’s K11, which feels really nimble, I’ve driven my own corolla which does roll a lot but still is happy to turn around the corners and lately thoron’s Nissan P11-144, which is both heavy and big car and it still has this nice feeling.

(Thoron broke his accelerator leg couple of weeks ago, so I’ve been driving his Nissan and working parttime as his personal driver) 😀

I’ve considered the possibility of too much unsprung weight affecting the feeling. I have to check how much heavier the SSR’s are, compared to my BBS’s and Widrics ultralight TE37’s.

When driving around, I can feel how the SSR’s do make the car more stable if going over 80km/h. I suspect this has something to do with the rotational mass and the gyroscopic effect, like how the rotating object doesn’t want to change the direction.

If the heavy feeling doesn’t change with the wheels, I have examine the the suspension setting. I’m pretty certain that my modest toe-in and camber settings have nothing to do with this, so I’m suspecting the caster angle.

If I remember correctly, the rear caster angle was left as it was. Front caster was added about one degree from 6 to 7. I read from somewhere that the AW11 could benefit from more caster, but now I think I have to dig deeper into this.

Other things I can think about the feeling are the sway bars. Front swaybar has one damaged bushing (the clamp is bit bent) which needs some attention. Maybe stiffer swaybars later?

Then the Roll Center Adjusters. Do I need these? How will these affect the overall feeling? TechnoToyTuning has a nice set just for AW11. At least, they should help a bit with the bump steering.

Other things I haven’t done yet:

Rear brakes need to be rebuilt and new discs and pads installed. Already have these. From Dixcel.

Then the AEM EMS 30-1110 for supra. I cheked the pinout and as far as I can tell, there shouldn’t be much twiddling with the wires. Injectors are in different place and the ISCV (Idle Speed Control Valve) has four wires on supra.

Still haven’t found the source for that weird sound. Sounds like something is really vibrating and it stops every time the revs go under 2800rpm. Wonder what it is.

Heh. I forgot to post the clutch line diagrams. Here is the worst case scenario, how I imagined it would be if I everything was against me: 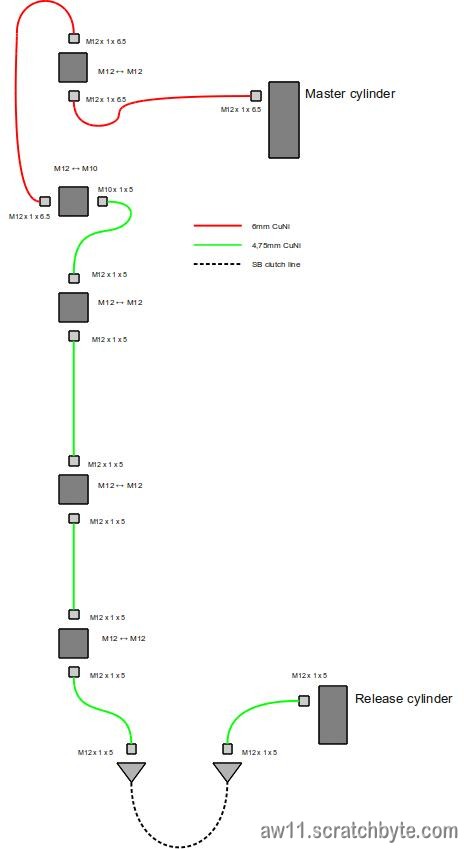 …and how it turned out: 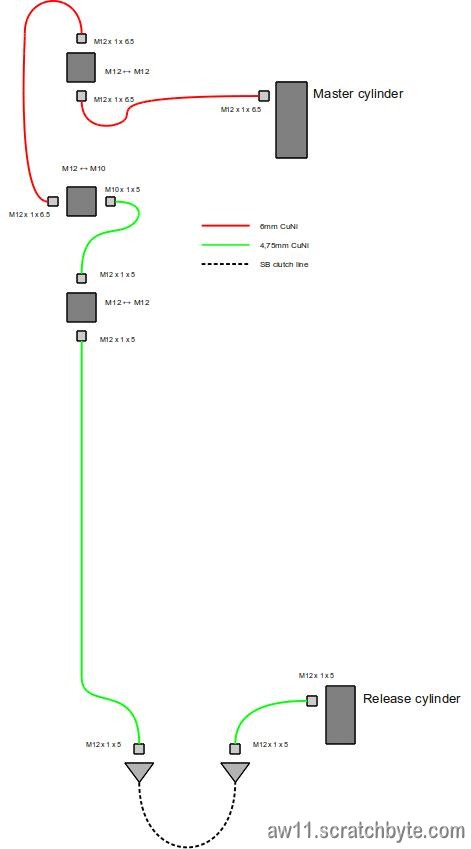 The 6mm CuNi tube in the beginning of the line is the only good part from the 6mm tubing experiment.

I drove around a bit. 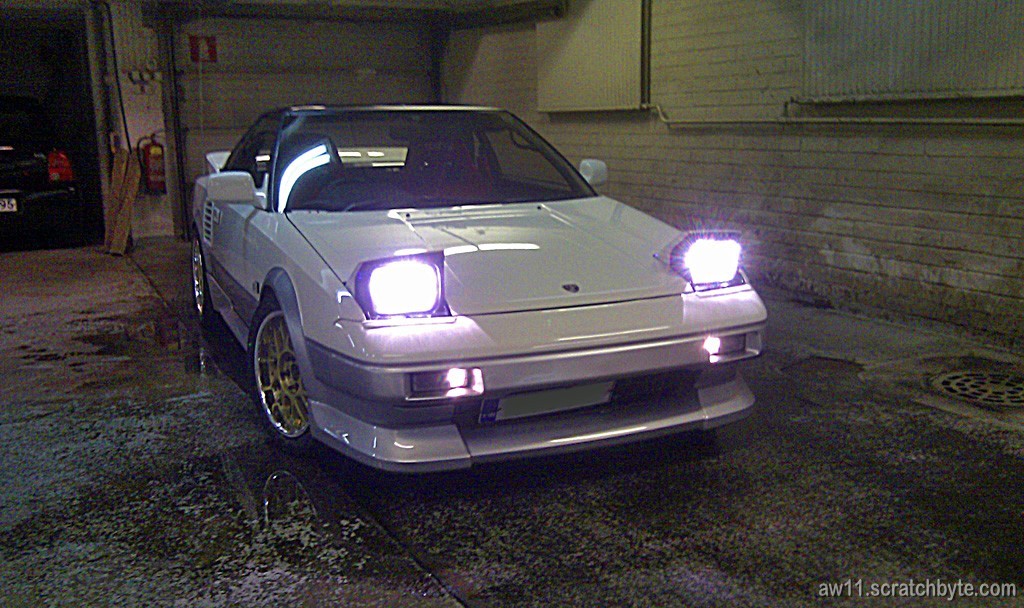 Just washed the dust off the car after driving. No wonder the picture is bit weird, I took it with my cell phone and tried to compensate this and that in photoshop.

I put some aluminium tape under the front lip to give it a little bit of protection. No idea if this actually works. Drops of water from washing the car. 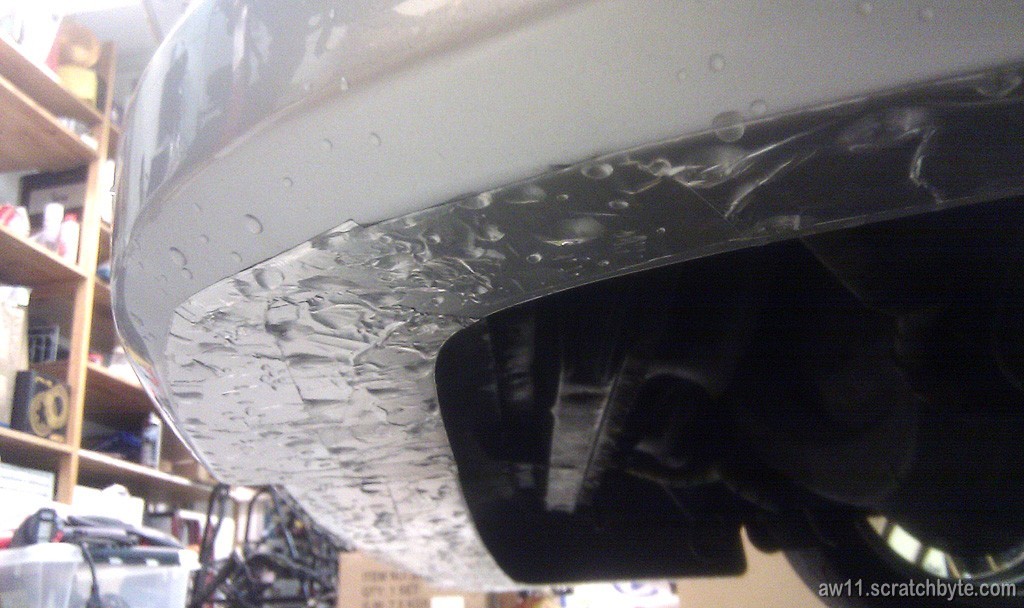 I was heading back to garage and decided to take the expressway, to test how the car runs. I checked my mirrors when I got off ramp and saw only one dark Mazda going about 100kmh towards downtown and a pair of really dim lights way behind me.

Then I accelerated slightly, but didn’t watch the speedo all the time. I started to slow down after 30 seconds or so and I suddenly noticed that I had someone tailgating me. The tailgater started to blink his headlamps and I wondered if I had something weird going on, like the engine in flames.

Did the tailgater have something on his roof?

I checked my speedo in an instant and I was doing bit more than the limit. I thought that I had accelerated way past the limit when I got off the ramp and I was just seconds away from losing my license, getting a hefty ticked and maybe facing a court case.

The cop van didn’t turn the blue lights on. They didn’t turn on their stop light. I had no idea what was going on, but the cops clearly did have intrest towards me and my driving. The road was empty, they 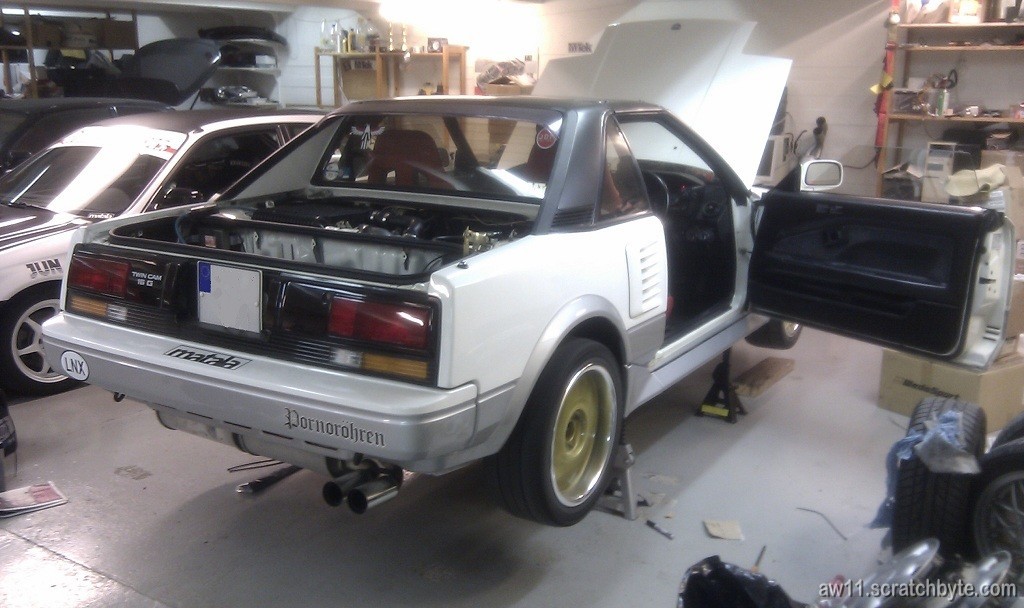 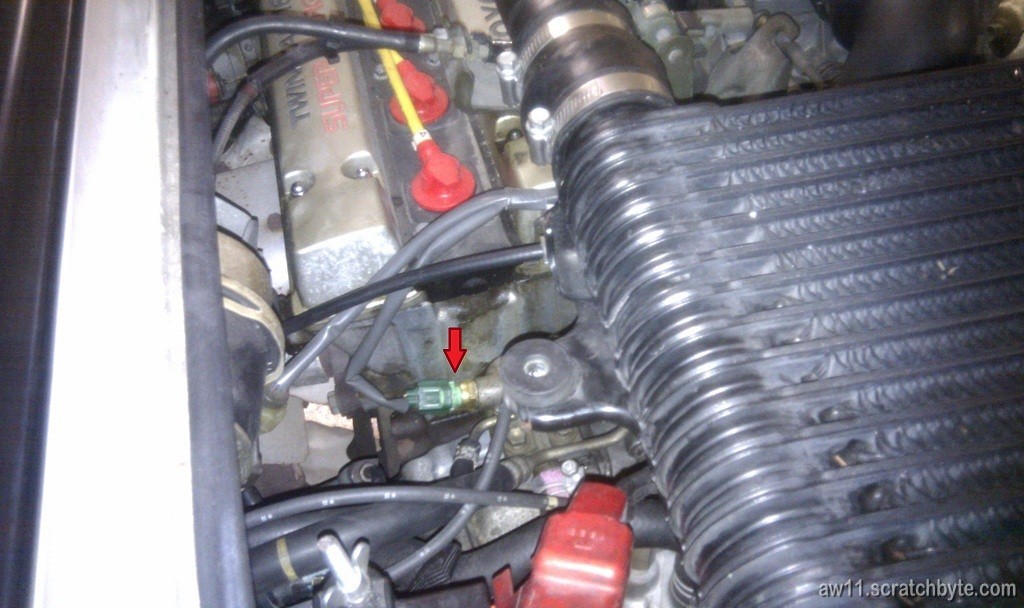 I got the car together again 🙂 Thanks Maladar!

In the first picture, I’m running the car on fourth and it sounds ok. Even Maladar noted that the sound was ok. In the second picture, I marked the replaced ECU water temp sensor with a red arrow.

I drove around for about a hour and the weird sound was still there. It sounds like something resonating, but when I opened both windows, I couldn’t say where it was coming from.

I heard two different kind of resonating sounds from exhaust, but this was much stronger. The sound is coming on around 3500 rpms on third, fourth and fifth and only when I lift the gas pedal. No idea what it could be. Gear changes are smooth, the gearbox generally just works and doesn’t do anything weird.

I drove eights and circles to break in the LSD but that didn’t help. I didn’t even notice if the LSD was working. 🙂